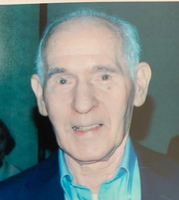 Edmund Webster Springer (Ed) July 29,1930 - July 19, 2020 Born to Dorothy and Howard Springer of Philadelphia, Pennsylvania, passed away peacefully in his home in Oak Valley at the age of 89. Ed is predeceased by his parents, sisters Betty and Dorothy, and brother Howard. He is survived by his wife Barbara (nee Olt), and was married for nearly 68 years. Ed is also survived by his children Diane Newcomb, Dottie Pfeiffer (Bill) and Debi Whittingham (Ed). Ed has seven grandchildren; Matt, Adam, and Jake Newcomb, Erik and Andrew Pfeiffer, Amelia Deflavia (nee Pfeiffer), and Lindsay Whittingham; as well as 9 great-grandchildren. He is also survived by his brother Robert, his brother-in-law and sister-in-law Fred and Mary Olt, brother-in-law John Latwinas, and many nieces and nephews. Ed met his wife Barbara at S.S. White Dental Company in Philadelphia. After a two-year courtship, they married in 1952. Ed then served 14 months as an Army Corporal in Germany during the Korean war. After his service, Ed and Barbara started their family in Maple Shade, New Jersey. Ed was a loyal employee of the Delaware Port Authority for 30 years. During this time, he enjoyed many hobbies which included fishing in his Boston Whaler in the back bays of Stone Harbor, bowling in various leagues, building a sailboat for his three daughters, and building his own stereo system from scratch. He also thoroughly enjoyed the ponies. To the angst of his wife, Ed decided to tandem sky dive on his 80th birthday and looked forward to riding a thoroughbred on his 90th. At this time, services will be private. In lieu of flowers, donations may be made to the Mantua VFW Post 7679, where Ed was a lifetime member. The VFW Post mailing address is: 8 NY Avenue, Mantua, NJ 08051.