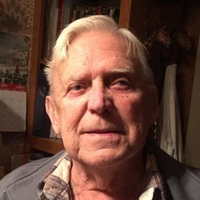 John V. Pohl May 24, 1928- December 21, 2020 Born in Red Bank, NJ, in the front bedroom at 17 Hudson Ave, John was a devoted husband, father, and grandfather. He was a man of his word! When family and friends needed something, it was done. John demonstrated integrity as a businessman. As a high school student, he began working for National Shoes and remained there opening and managing stores in New Jersey and Virginia before opening his own shoe store in Pitman known as Pitman Shoes. In later years, he managed Pitman Camera Center and was co-owner of Wood Wizzard's also in Pitman. During his business career, John also was a car salesman at dealerships in Glassboro and Turnersville. Upon retirement, as a skilled craftsman, he continued his woodworking creating family heirlooms that will be treasured by generations to come. John was a veteran having served six years in the Army National Guard. Being civic minded, he was a founding member of the Old Village Fire Company in Middletown, NJ. A longtime member of the Pitman Lions Club, Mr. Pohl was a Past President. As a business owner, John was also a member of the Pitman Business association. Enthusiastic about life, John sought new challenges and adventures. His interests were varied and included the following: bowling league member, tennis, sailing the Navesink River, scuba diving, an avid member of Salem County Sportsman Club and others, woodworking, photography, horseback riding- (continuing to ride through his seventies), ice skating, and gardening. At the young age of eighty-eight, John bought an iphone and ipad and delved into another new adventure! Many memories were created around the kitchen table where family and friends gathered for a cup of coffee or a game of Scrabble complete with his inventive words. Noteworthy memories included singing on the radio as a child and playing his trumpet with Harry James at the Count Basie Theater in Red bank, NJ. Predeceased by Margaret C. Pohl, his wife of 49 years, his parents John B. and Doris L. Pohl, his brothers Robert W. Pohl and Wallace W. Pohl. He is survived by his second wife, Roberta Pohl , his children Susan Maglione of Inverness, Fla., Betsy Kenney of Pitman, NJ, Janet Essner of Glassboro, NJ, John B. Pohl (Denise) of Ocean City, NJ, and Diana Smith of Palmyra, NJ. Also survived by his grandchildren Abbey Malcolm (Bryan), Gabrielle Maglione, Kris Maglione, Molly Swander (Taylor), Joshua Kenney (Linda), Sarah Valdivieso (Fred), Megan Fields, (Matt), Stace Essner, Grant Essner (Jen), Jenna Burke (Steve), Katie Guerin (Greg). Also survived by his great grandchildren Maddy Malcolm, Meryn Malcolm, Teagan McDade, Brinley Swander, Oaklyn Swander, Tenley Swander, Samantha Kenney, Jessica Kenney, Alex Valdivieso, Hadley Fields, Taylor Essner, Hunter Essner, Logan Essner, Sadie Burke, and Aubrey Burke. Also survived by Roberta's children and grandchildren Valerie Torelli (Robert) (Jenny) (David), Vicki Garron (Susan), Bobbie Diliso (John), Harold Garron (Nancy) (J.J). John will be missed immensely by his family but remembered for his sense of humor, devotion to family, and love of life. At 92, he died being the longest living member of his family. His children and grandchildren are quite certain this was due to his eternal optimism sprinkled with a fair amount of his stubbornness. Services will be determined by his family at a later date. Donations may be made in his memory to an animal rescue of your choice or Samaritan Hospice, 5 Eves Dr, Suite 300, Marlton, NJ 08343..