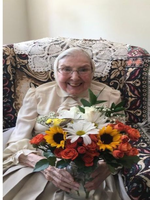 Esther W. Smith (nee Wilhelm), age 96, died on January 5, 2021 at the Pitman Manor, where she had resided for the last three years. Formerly of Voorhees Township, Esther was raised in Mullica Hill and graduated from Glassboro High School in 1943 and Northwood Bible School in 1946. She served as a missionary to Cuba from 1946- 1951. Esther was a school teacher for 28 years, teaching at various schools in South Jersey. She retired in 1981 from the Pennsville School System. Esther was a faithful member of the South Jersey Christian Fellowship in Magnolia, NJ for 50 years and was greatly loved. Over these years, she served her Lord in many different capacities. She was predeceased in death by her husband Earl R. in 1996. She is survived by her children; Nevin Smith Sr., Evangeline R. Preston, Richard M. Smith, Twila M. Metzgar, 16 grandchildren, 39 great grandchildren and 38 great-great grandchildren. She was also predeceased in death by her daughter Irene Balliet and siblings, Myrtle Gant, Thelma Garcia, and Hollis Wilhelm. In lieu of flowers, memorial donations may be made to: South Jersey Christian Fellowship, 306 South Warwick Rd. Magnolia, NJ 08049. Memorial Celebration of her life will be private. Final Resting Place will be Ferrell United Methodist Church Cemetery.