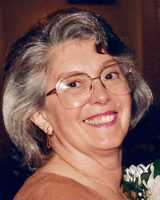 Corrine Gangi of Pitman, New Jersey passed away peacefully in her sleep on February 1, 2021 at the age of 80. Corrine was the loving and devoted wife of Raymond Gangi for 60 years. She dedicated her life to her family and yet she found time to spend on her lifelong passion for dancing and teaching dancing. Born and raised in Portland, Oregon, she started dancing when she was five years old and by the age of 13 had started performing professionally. She was a regular on ABC's "Ron Myron Show" in Portland appearing for over a year. She also performed as a soloist and with dance companies on NBC and CBS television, in night clubs, and on stage throughout the Pacific Northwest. As a teen, Corrine received private dance instruction from the teacher of many Hollywood stars, Vera-Ellen and Mitzi Gaynor among others. With her mother's help she opened up the Corrine Somann dance studio when she was 16 where she taught up until the time she moved to New York City in 1960. While in New York City she taught at a leading dance studio where she directed and choreographed many performances including those at the Brooklyn Academy of Music and the New York World's Fair. Corrine also continued her dance training with some of the world's most distinguished teachers. Over the years, she has judged many dance contests both in the U.S. and Canada. In 1972 Corrine and Ray moved to South Jersey and five years later opened the Corrine Gangi Dance Center in Pitman which she managed for the next 40 years. As an active member of her community Corrine received the Gloucester County Freeholders proclamation of "Tap Dance Day" commemorating Sammy Davis Junior's death in 1990. She formed the DancElectric Dance Company in 1995 which, over the years, performed 22 benefit shows for the Gloucester County College Foundation's scholarships for students in the arts. In 2006 Corrine received the "Citizens Award Medallion in Recognition of Service to Gloucester County College". She was selected as a "Local Hero" by Verizon in 2007, and was featured on multiple locations in that year's Yellow Pages. Corrine will be greatly missed by her family, sons Matthew (Julie), and Jason, grandchildren Nina and Evan, her brother Gene, and by her many friends and students. A Celebration of Life gathering will be held at a later date. In lieu of flowers please consider donating to Alzheimer's Disease Research (www.brightfocus.org/cureAD) or to a charity of your choice.