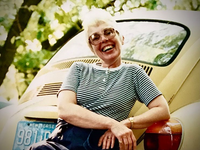 "It was fun. Everything I did had meaning and I enjoyed most of it. Some of it I didn't, but the majority was good." Shirley Anne Murphy, née Walton, passed from this life peacefully on February 2, 2021 at United Methodist Homes at Pitman (Pitman Manor) after a decades-long battle with multiple sclerosis. Shirley was born in Glassboro on December 8, 1933. She started school at the Glassboro State Teachers College Demonstration School where she learned to play soccer and became a lifelong soccer fan. She also attended Academy Street School, Glassboro High School (class of 1951), and Ursinus College (class of 1955). At Ursinus, she was a member of the Phi Alpha Psi sorority and graduated with a degree in psychology. After college, Shirley traveled across the United States to work in California and later in New York City, where she met and married the love of her life, Dave Murphy. They lived in New York and Massachusetts for several years before moving back to New Jersey in 1965 and settling down in Pitman to raise their family. Shirley was always a problem-solver and applied her talents in a wide variety of jobs, including HR and insurance at Raytheon, tutoring in the Pitman school system, buying and selling antiques, managing The Mill House gift shop, and working at Drissel's Hardware in Pitman. There were always cats in Shirley's home--from her childhood pet Barometer through Kitty Kitty, who lived with her at Pitman Manor. All of her cats were rescued, and she pampered and spoiled every one of them. She enjoyed seeing pictures of the "grandcats" rescued by her daughter Kathie. Shirley's other passion was for gardening--first vegetables, and later landscape plants, especially hostas. There were over 100 different varieties of hosta growing in her gardens on Pitman Avenue. To keep them growing, she designed, built, and installed her own underground watering system. She kept up her garden until she moved into Pitman Manor in 2012. Shirley was "Martha Stewart before Martha Stewart existed," as she often said. Besides gardening, she knit, crocheted, and sewed everything from Barbie clothes to decorator draperies, did Pennsylvania Dutch painting, restored furniture, built furniture, and baked. Shirley's Thanksgiving pie fest is a tradition now carried on by her daughter Nancy, and her Christmas cookies, made by the tens and even hundreds of dozens, were legendary. She loved Christmas and amassed a collection of thousands of ornaments in every shape you can imagine, including asparagus, eggplant, and cherry pie. Shirley was very happy to have fulfilled her goal of voting for Joe Biden and Kamala Harris in 2020 and seeing their inauguration in 2021. ***** Shirley was predeceased by her husband, David A. Murphy; her parents, Gordon L. Walton and Elva M. (Diehl) Walton; two sisters, Ruth (Walton) Piel and Lois (Walton) Fulton; and three brothers, Gordon, Howard, and Brian Walton. She will be missed by her daughters, Kathie (Maura) and Nancy, as well as her goddaughter Kim Coyle, several loving nieces and nephews, and her very special cat, Kitty Kitty. In lieu of flowers, please consider making a donation to RescueKitty.org, Earthjustice.org, the Fellowship Fund at Pitman Manor, or a charity of your choice. We are very grateful to the staff at Pitman Manor, especially the second floor healthcare staff, for helping Mom's life to continue to be meaningful and interesting, no matter what physical obstacles were in her way. We also thank Ascend Hospice for their care over the past year. A celebration of Shirley's life will be held when it is safe to gather again. Interment at Bethel Cemetery, Hurffville. Memories may be shared at www.kelleyfhpitman.com.