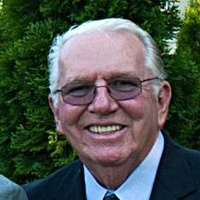 John Joseph (Jack) Carr, passed away on Friday, June 11 th , at Jefferson Rehabilitation in Washington Township, NJ. Jack was born in Philadelphia, PA to John Joseph Carr II, and Margaret (Walsh) on May 16, 1934. He attended St. Monica Roman Catholic Elementary and Bishop Neumann High School. He honorably served our country in the U.S. Navy from 1951-55 during the Korean War, promoted to Petty Officer Third Class by the end of his service. He was the recipient of National Defense Service Medal, China Service Medal, and the Navy Occupation (Europe) Service Medals. He continued his service in the US Naval Reserve until 1959. He circumnavigated the world during his service on the USS Hornet, giving him his lifelong appreciation for the freedom, opportunity, and beauty of our country. Following his discharge, he worked for Motor Ignition Company of Philadelphia as a Salesman for several years, and in 1963 established Philadelphia Carburetor and Ignition Company with his business partner, Jack Wusinich, until his retirement in 2004. He loved sailing the open seas again on his sailboats, "The Pussycat" and "My Way," along the Atlantic Ocean and Chesapeake Bay, and found kinship and friendship with the other boat owners on Pier 7 at the Farley State Marina in Atlantic City. He traveled with his beloved wife "Margie" throughout the United States, Bermuda, Italy, and the Ireland of his ancestors. They lived together in Philadelphia, Washington Township, and Margate. Jack is survived by his beloved sister Margaret (Peggy) Carr and sister-in law Catherine (Cass) Cianci, and by his six children, Kathleen Mahmoud, John, Kevin, Margaret Silhol, Paul, and Christopher, their spouses and partners Allaeldin Mahmoud, Kathleen Carr, Yulia Petrova, Richard Cushman, Jacqueline Polillo (respectively), and by his 15 grandchildren Kevin, Amira, Ryan, Nina, Emily, Dean, Shannon, Monica, Daniel, Bridget, Kathleen (Katie), John Joseph (Sean), Trevor, Aiden, and Michael. He is predeceased by the "Love of His Life" Margaret (DeAngelo) and his sister Eleanor (Leonard). Funeral services will begin with a visitation with family and friends will be from 8:30 to 10:00 am, Friday June 18th, at Kelley Funeral Home 125 Pitman Avenue, Pitman, NJ. A funeral mass will follow at 10:30 in Our Lady Queen of Peace Church at 161 Pitman Avenue, followed by a family burial at Holy Cross Cemetery in Yeadon, PA. In lieu of flowers, the family encourages memorial donations to your favorite charitable organization. Our parents were blessed, and we are thankful for the love and devotion you all expressed during their lifetimes.