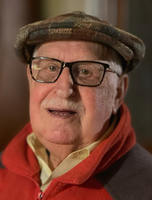 Mr. Paul Loeb of Glassboro, age ninety. Dearly beloved and loving Husband of the late Dr. Helen Loeb. Much loved father and father in law to David and Yehudit Lahav, and William and Naomi Loeb. Cherished grandfather of William Loeb II, William Loeb III, Ramon Loeb, Jaquan Loeb, Michael Loeb, Nina Loeb, Shaul Lahav, Yael Lahav, Liron Lahav and Netta Lahav-Ben Tovim. Loved brother to Marianne, Johanna Loeb, Betsy Kay, and Ernest Loeb. Paul was born to Jacob Löb and Hedwig née Lehman in Meinheim, Germany in 1930. When he was eight years old, he and his family succeeded in fleeing to New York, subsequently surviving the heinous Nazi regime just prior to World War II. He fondly recalled time with his caregiving aunt Emmy. Paul recounted surviving worse ailments then this recent pandemic with less medical advancements for his protection. His hard work, dedication and diligence earned accelerated academic advancement. Upon arrival in NY, he spoke no English, yet did not allow the language barrier to deter him. He adopted an American way of life entirely and passionately. Playing stickball with his friends in the street and afternoons dedicated to assisting in his father's Deli were often shared memories. He strived to be a positive example to his brothers and sisters alike. He met Helen, his future wife and soulmate, during a Halloween dance at the Presbyterian Church in Manhattan where they were later wed in Holy Matrimony. They went on to share a magical sixty nine years together. Beloved father to two sons, David and William who recall only loving memories. He and his family relocated to Glassboro in 1958 where they built a life as he would tell it, not on an island. He is celebrated as an electrical engineer for RCA then GE with advanced applications in communications, cryptography and patented technology, to name a few. People recall him as a stately gentleman and a pillar of our community with nothing but kind words, innovation, a well timed sense of humor and a generously gentle soul. He helped make men out of boys continuing a family relationship with the Boy Scouts, assisted with Church youth groups, became a teacher of astronomy and physics, and was asked to join nearly every council he attended. An avid softball enthusiast, track and field athlete, camper, hiker, bicyclist, swimmer, mathematician, puzzle solver and world traveler. We often joke that it would be easier to list the places he had not been. Then spoon he kept in his shirt pocket for taste testing became a personal trademark. His affinity for origami was evident in the whimsical creations he left in waiting rooms, churches and our homes. This art form was another of his unique calling cards. He is the best example of a man this writer could have ever hoped to share time with and learn from. Though he had touched, saved and loved many in so much of his time here, he apparently decided he had kept his wife Helen waiting long enough. He joined her in Heaven on Wednesday, June 23, 2021 at 5:11 pm. At ninety years young, he had so much more to contribute to the world and we are all sorry he is gone. He will always be with us in spirit. Our loss is Heaven's gain. We pray his spirit visits us. Our hearts are forever open to the unique love he offered?? Relatives and friends are respectfully invited to attend Memorial Funeral Service for Paul, which will be held at The First Pitman Presbyterian Church at 10 Wildwood Ave, Pitman NJ, 08071 on Tuesday, June 29, 2021 commencing at 1:00 pm EDT for meet and greet and a 2:00pm EDT service to be followed by a light lunch and refreshments at the church. Livestream of the service will be available via Facebook Live and YouTube for loved ones unable to attend.