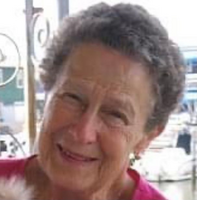 Jean Bower (nee Daniels) of Glassboro passed away on October 3, 2021 at the age of 94. She was born in Mt. Ephraim, NJ on September 23rd, 1927. Jean leaves behind her three children Sheli (Bob) Burgess, Jack II (Sandy), Jann (Bill) Jenkins, her sister Marty (Paul) Scheirer, grandchildren Robin, Bobby, Jack III, Tara, Steven, Daniel, Billy and Cyndi and great grandchildren Cole, Quinn, Charlotte, Bobby, Maggie Jo, Jack IV, Tommy, Travis, Gavin, Paige, Alice Jean, Steven II, Daniel II, Cecelia, Billy, MacKenzie, Asher and Ethan. She is predeceased by her husbands Jack Bower and Armando Fittabile and sisters Edna Parker and Ruth Harrington. Jean attended Audubon High school, NJ where she played 4 years of field hockey and 4 years of tennis. She graduated from Ursinus College in 1950, married her college sweet-heart, Jack and raised her family in Glassboro, NJ. She began her teaching career at Penns Grove High School where she taught and coached for 3 years. Her field hockey and basketball teams both won their conference title two years. Jean taught health and physical education at Glassboro High School starting in 1966, coaching field hockey from 1968-1975. Her teams boasted a record of 87-13-14. Her 1972 team won the South Jersey State Title and the NJ All State Title with a perfect 18-0 record. The 1975 team won the South Jersey Group 1 and NJ State Group 1 titles. Her teams were conference champions in 1968, 1970, 1971, 1972 and 1975. Some of her accolades as a field hockey coach for Glassboro High School include: Field Hockey Club of South Jersey Coach of the Year in 1972 Woodbury Times Coach of the Year in 1975, the first woman to earn this distinction Courier Post Coach of the Year in 1975 Gloucester County Sports Hall of Fame, inducted in 1987 Glassboro High School Hall of Fame, as a coach, inducted in 2008 Glassboro High School Hall of Fame, for her state championship field hockey team, inducted in 2008 South Jersey Coaches Association Sports Hall of Fame, inducted in 2019 Throughout the years, Jean was a member, Deacon, Sunday school teacher and youth group leader at the First Presbyterian Church of Glassboro, a member of the St. John’s Lutheran Church in Ocean City, a Sunday school teacher at St. Peter’s Methodist Church in Ocean City and a member of the Woodstown Presbyterian Church in Woodstown. She was an avid tennis player, golfer, sailor, and her biggest passion was playing bridge, wherever and whenever she could, especially at the OC Yacht Club. She loved to stay active by cooking, baking, sewing, knitting, crocheting and was incredible at them all. Jean was a gardener, bird-watcher and loved to travel and read, especially John Grisham. Jean learned to swim at age seventy, even competing as part of the Bower family relay at the Brookside master’s swim meet. Jean’s friends and family would describe her as even-tempered, determined, patient, full of life and someone who loved her sweets. She never let the grass grow under her feet. Jean was the matriarch of her family. She was an incredible and loving mother, Mom-Mom and Gi-Gi and her joy in life became her eight grand-children and nineteen great-grand-children. She absolutely dominated life and she did it her way to the very end! A Celebration of Life will be held at a future date at the convenience of the family.