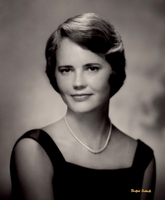 Joanne Kramme passed away peacefully at her home in West Deptford, NJ on December 14, 2021 with her beloved daughters at her side. She was 88. Born Joanne Friedlin to the late French Judson Friedlin, D.O., and Lucile Brown Friedlin, Joanne grew up in Pitman, NJ. At Pitman High, with Coach Ruth (Godshalk) Sergeson, Joanne led the girls basketball team to four Tri-County Championships, generating headlines such as "They Have Forgotten How to Lose" and "Take A Lesson Boys." Joanne became the first girl in New Jersey to score more than 1,000 points, holding that record for 57 years. She was later inducted into the Sports Halls of Fame for both Pitman High and Southern New Jersey. Joanne earned a B.S. in biology from Ursinus College in 1954. She became a medical writer at Smith, Kline & French (now GlaxoSmithKline) in Philadelphia, forging lifelong friendships and a passion for the arts. In 1962 she married Gerald A. Kramme, then President of P.E. Kramme Inc., and Chairman of the Board of Elmer Community Hospital. Together in Monroeville, NJ they raised two daughters, Carol and Linda. "Look it up!" Joanne would exhort when one asked a word's meaning. Joanne had a way with words: brevity and compassion were her hallmarks. Joanne supported her daughters' athletic pursuits, setting unofficial records for matches attended (not to mention trips bringing forgotten racquets). Politely but firmly evoking Title IX more than once, she quietly helped ensure the girls' teams received the same attention and equipment as the boys'. Joanne volunteered with the Alfred I. Dupont Hospital for Children, the American Cancer Society and South Jersey HospiceCare. She also hosted player piano sing-alongs for local nursing home residents. One of her most rewarding moments: a once listless senior "awoke" and began tapping his toes. Joanne shared her love of Ocean City, NJ with her family. Stories of the ocean swallowing her favorite hat and nostalgia for The Flanders translated into beach stays each June with her mother (Nanny). The ocean held for her a special magic. Silence and solitude were Joanne's close allies. She found both in Maine, at the cabin she and Gerry so loved. Over three decades she delighted in hunting for driftwood; laughing with Ruth (Gooch); and kayaking on the lake. Joanne treasured nature, often creating unique art from found objects. She nurtured creatures great and small, from sea turtles to monarch butterflies to bats. Always the epitome of class and grace, Joanne will be sorely missed. She was predeceased by her husband of 57 years, Gerry. Joanne is survived by her daughters Carol B. Kramme (Albert Randolph) and Linda K. Walker (Shawn); grandson Andrew Rowan Walker; her brother F. Jay Friedlin, D.O. (Joan), and many nieces and nephews and their families. To honor her memory, consider contributing to an environmental, animal welfare or cultural organization in need, or perform a simple act of kindness. Funeral services are private. Written expressions of sympathy and shared memories may be sent to her daughters, Carol and Linda, c/o Kelley Funeral Home, 125 Pitman Ave., Pitman, NJ 08071, or expressed at https://kelleyfhpitman.com.