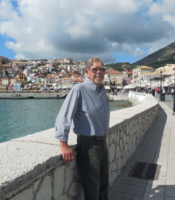 William Edward Stanwood, 81, of Ocean City passed away on Good Friday, April 15. He was born in Camden, NJ to Lillie and Howard Stanwood and grew up in Pitman, NJ. As a child, Bill spent his summers at YMCA Camp Ockanickon in Medford, NJ, where he enjoyed some of the happiest days of his youth. It was there that he met life-long friends and developed the Christian values and morals that he embodied throughout his entire life. Bill was a graduate of Pitman High School class of 1958 and earned Bachelor's and Master's degrees in education from Glassboro State College (now Rowan University) while working full time at the Pitman post office. Bill began his career in education as a sixth grade teacher, and in 1972 was appointed principal of the Woodstown Middle School where he inspired generations of young people. While principal he demonstrated and encouraged a positive attitude that became a role model for both students and staff. He never missed a day without his "attitude" pin in his lapel. Following retirement in 1994 Bill spent several years as adjunct professor and student teacher supervisor for Rowan University. Bill was a dedicated volunteer for every church parish to which he belonged, teaching CCD and serving as Eucharistic minister and usher. During the pandemic, Bill volunteered to be lead usher for his church and attended Mass every day of the week and 3 times on Sundays. He was a past president/trustee of the Ocean City Ecumenical Council through which he devoted many hours helping the disadvantaged in his community. He was a faithful member of the Knights of Columbus Council #12560. Favorite pastimes were being with his family, working out at the Ocean City Fitness Center, playing golf, rooting for the Eagles, and traveling the world with his cherished wife of 61 years, Kris, and their large circle of friends. He was fortunate to have visited all 50 states and dozens of foreigh countries, a highlight for him being the Holy Land. Bill is predeceased by his parents, brother Ron Stanwood, sister-in-law Barbara Stanwood, daughter-in-law Jane Stanwood, and brothers-in-law Gene Wollter and Fred Wolpert. In addition to his wife, he is survived by his daughter Lynne Leadbeater (Scott), son Howard (Hap) Stanwood, grandchildren Kate Greenwald (AJ), Jamie Young, Will, Matt and Laura Stanwood, great grandson Tony Greenwald, brother Mark Stanwood (Angela), sisters-in-law Carol Wolpert, Rita Misero and Maryann Wollter, and many nieces and nephews. Friends may greet the family at 9:30 AM on Friday, April 22 at Our Lady of Good Counsel Church (St Damien Parish) 40th & Asbury Ave, Ocean City, NJ followed by a Mass of Christian Burial at 11:30 AM. Interment will be at Head of the River Cemetery, Estell Manor, NJ. In lieu of flowers the family requests donations to the YMCA of the Pines (ycamp.org).