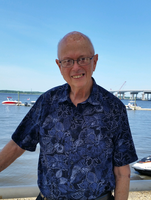 Robert Henry Jenkins, Jr., age 83, died on May 11, 2022. Robert lived in Delanco over 70 years before moving to Rio Grande in 2009. Bob graduated from Palmyra High School in 1956 and received his Bachelor's Degree from Rider College in 1960. He proudly served in the US Navy from 1960-1966. Bob was Senior Account Executive of Barclay Insurance Company, Riverton, retiring in 2005. After retirement, Bob worked part time at the Wildwood Convention Center. He was a member of Rotary International serving his community over 40 years. He also served on the Board of Directors for Delanco Federal Savings Bank for over 35 years. He was an active member of Dobbins Memorial United Methodist Church where he served as Lay Leader, Lay Delegate to the Greater New Jersey Conference, Chairperson of Administrative Council for many years, as well as serving on various other committees. Later, Bob became an active member of the Tabernacle United Methodist Church where he was the United Methodist Men's President, taught the Lower Lights Sunday School Class, served as chairman of the Finance Committee and Lay Delegate to the Greater New Jersey Conference for many years. He is survived by his daughters Judy (Rev. Dr. James) Bolton, Jackie Winkelspecht, grandchildren Rebecca and Lindsey Bolton, Nathan and Noah Winkelspecht and sisters Dorothy Armstrong and Nancy (Gary) Grace and dear friend Cass Pascali. Friends may greet the family 7-9pm on Monday in the Pitman United Methodist Church, 758 N. Broadway, Pitman, NJ and after 10am on Tuesday, followed by a funeral service at 11am. Interment Lakeview Memorial Park. Those desiring may make a contribution to The Samaritan Center at Voorhees, 265 NJ-73, Voorhees, NJ 08043. Memories may be shared at www.kelleyfhpitman.com.