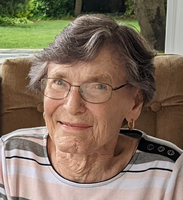 Margaret Jane Fortney (nee Jones), age 83 years, died August 27 at Cooper University Hospital, Camden, NJ. Born in Fairview, WV, she graduated from Fairview High School in 1957. She married the love of her life, James W. Fortney in 1957 and moved 7 times for employment opportunities in the first 15 years of marriage. They settled in Pitman, NJ in July of 1972. Margaret was employed by Drs. Simmerman from 1976 to 1992. In 1992, she and Jim purchased and operated Ricky's Hallmark in Glassboro, NJ and Alicia's Hallmark Store in Pitman, NJ until they retired in 2005. She was very involved in her community while her children were growing up. In later years, was active in the Pitman Chamber of Commerce and Garden Club. In 2009, she and her husband Jim were honored with the "Lifetime Achievement Award" by the Pitman Chamber of Commerce for their decades of volunteering. She was very involved in the Pitman Christmas in the Park and the organization of the activities from the very beginning. She was instrumental in securing the advertising for the little houses, getting them painted, and setting up the park. She could be seen at the Santa House on many cold nights during the month of December. She also worked behind the scenes for the Pitman Christmas Party for Kids. Her grandchildren and great grandchildren were everything to her and she loved talking about them to anyone! Survived by her husband of 66 years, James "Jim" Fortney, children: Patti and Ray Kelley, Merri and Barry Owen, Jim and Patti Fortney, grandchildren; Ryan and Sarah Kelley, Schuyler and Megan Kelley, Matthew and Missy Rutter, LeeAnn and Kyle Donahue, Alicia and Ethan Cannon, Justin Fortney, and Meredith Owen. Also survived by her great grandchildren; Jane and Anna Kelley, Jack and Luke Kelley, Catalina Rutter, Lincoln Donahue, Isaac and Harper Cannon, and many nieces and nephews. Friends may call on Wednesday from 6 to 8 PM in the KELLEY FUNERAL HOME, 125 Pitman Ave, Pitman, NJ and on Thursday from 10 to 10:45AM. Funeral service at 11AM. Interment Gloucester County Veteran's Cemetery. Those desiring may make contributions to the Pitman Christmas Party for Kids, P.O. Box 93, Pitman, NJ 08071. Memories may be shared at www.kelleyfhpitman.com.