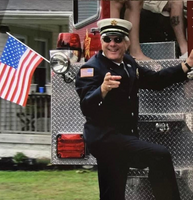 William "Bill" Harold Ewe Sr., age 74 years, a lifelong resident of Pitman, born and raised in Pitman, NJ. He attended Pitman High School where he played 4 years of golf, and graduated Class of 1967. Bill attended Glassboro State College and graduated in 1970. While there, he played 4 years of golf where he won a State Championship. On December 19th, 1970, William married his High School sweetheart Jeanne. Together they raised three loving sons who are also dedicated firemen, Bill, Brian, and Brett. Bill started working with Atlantic City Electric Company in 1977 as a Lineman, and worked his way into the Engineer Department where he finished his career after 29 years. After his career with AC Electric, Bill went to work for Kelley Funeral Home, where he called himself the "Head Yardman". He spent his spare time enjoying NASCAR races up and down the East Coast with family and friends. He loved watching and coaching his 3 sons, and 9 grandchildren play youth, high school, and college sports. Bill was a dedicated lifetime member of Highland Chemical Engine Company for 55+ years. He worked his way up the ranks to Chief, serving for over 10 years. He dedicated his service to Highland Chemical Engine Company protecting and serving the town of Pitman, mentoring young firefighters, and spending countless hours with many of Highland's fund-raising efforts to provide fire equipment, fire gear, fire trucks, and maintenance of the firehouse. Survived by his wife of 52 years, Jeanne Sailor, sons; William H. Jr., "Billy", wife Lauren, and their 2 sons, Jacob and Aiden: Brian, wife Janel, and their three sons, Carter, Gavin, and Gabriel: Brett, Angela and their 4 children, Skylar, Kaleb, Violet, and Savannah. Friends may call on Thursday, Jan. 5 from 6 to 8PM in the KELLEY FUNERAL HOME, 125 Pitman Ave, Pitman, NJ and on Friday from 10 to 11AM. Funeral service at 11AM. Interment at Manahath Cemetery. The family has requested in lieu of flowers that donations be made to Highland Chemical Engine Company, 109 East Woodland Ave, Pitman, NJ 08071.