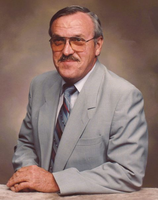 Jerry Nathan Lint, age 88 years, died surrounded by his children on January 15 at Inspira Hospital, Harrison Twp., NJ. Born and raised in Meyersdale, PA. Jerry served in the U.S. Army from 1957 to 1959. He received his Bachelor's degree from Clarion University of Pennsylvania and his Master's degree from Penn State University. He taught at Meyersdale High School from 1959 to 1964. He then taught geography at Rowan University (formerly Glassboro State College) for 34 years until his retirement. He was a member of Masonic Lodge #554 in Meyersdale. Predeceased by his wife of 59 years, Helen Claire Roberts. In addition to his love for traveling with Helen in their trailer to 49 of the 50 states, Jerry enjoyed many hobbies and activities including vegetable gardening, photography—having taken thousands of slides for his classes, and woodworking. Jerry lived to eat and enjoyed cooking for his family and friends. In his travels, he knew of all the good German restaurants along his favorite routes. Active in his church, he served as both Deacon and Elder on the Church Consistory and was elected President of the Consistory for several terms. Survived by his children; Elizabeth (Allen) Samuels, Mary (Karl) Schreder, and Rick (Stephanie) Lint, also survived by grandchildren; Zachary and Nathan Samuels, Sarah and Ethan Schreder, Kristen (Patrick) and John Lint. Also survived by great granddaughters Layla and Macie, and brother Joseph (Rosemary) Lint. Friends may call on Thursday from 7 to 9 PM in the KELLEY FUNERAL HOME, 125 Pitman Ave, Pitman, NJ. Funeral service will be Friday at 11 AM in the Bethlehem United Church of Christ, 137 S. Main Street, Glassboro, NJ. Interment Amity UCC Cemetery in Meyersdale, PA. Those desiring may make contributions to the Charity of Choice. Memories may be shared at www.kelleyfhpitman.com.